Home Travel Siquijor Travel Guide: Exploring the Mystical Island of the Philippines
Tell your friends about it!

Located in the Visayas region of the Philippines is the tiny island previously known for witchcraft and mystical elements- Siquijor. However, the island is definitely not as scary as it has been described all these years. It’s actually such a peaceful, laid-back place that makes you feel really safe.

During the Spanish colonial period, Siquijor was called Isla del Fuego, which translates to Island of Fire. This is because the Spaniards used to see tiny glows emanating from the mountains as they sailed at night. Later on, they found out that the light came from the many fireflies that dwelt on the island’s forests.

Now, Siquijor has become a known tourist destination as it boasts of many sights and natural attractions, despite being the third smallest province in the Philippines. Touring the island somehow reminded me of Camotes, Camiguin, and a little bit of Siargao.

The small island of Siquijor is divided into six towns: Lazi, Maria, San Juan, Larena, Siquijor, and Enrique Villanueva. In this post, I’ve listed down all the tourist spots in Siquijor that I know, plus my experiences on the ones I have visited.

Balete trees have always had a creepy reputation because of old stories that say these are usually haunted. This particular tree in Siquijor is more than 400 years old, the oldest in the island, and is believed by the locals to be enchanted. The most interesting part of it is that the water in the man-made pool at its base is said to come from the tree itself.

There are also fishes in the water, the kind that is used for fish spa. During our visit, we didn’t see anybody swim in the pool, but there were a lot of people who dipped their feet into the cold water for the fish spa experience. 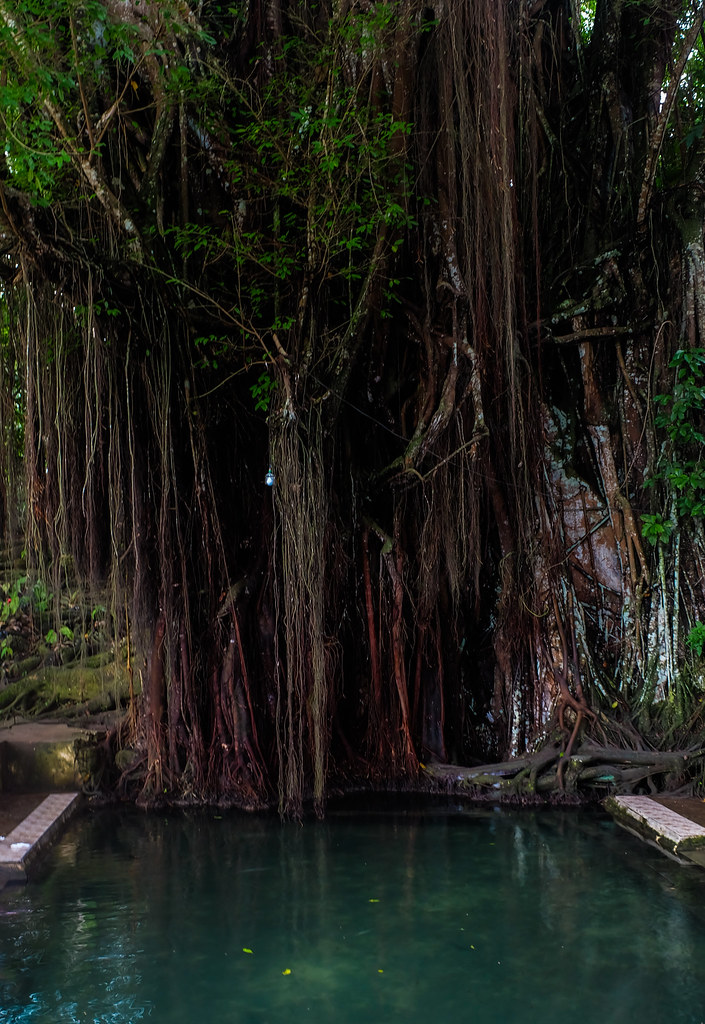 Channel your inner Tarzan as you swing on the rope and fall into the cool waters of Lagaan Falls, which is accessible by a short trek from the main road. But if you doubt your arm strength, you can slide or jump from the mini waterfall. There is also a smaller natural pool on the upper level where you can just chill, but beware of mosquitoes! 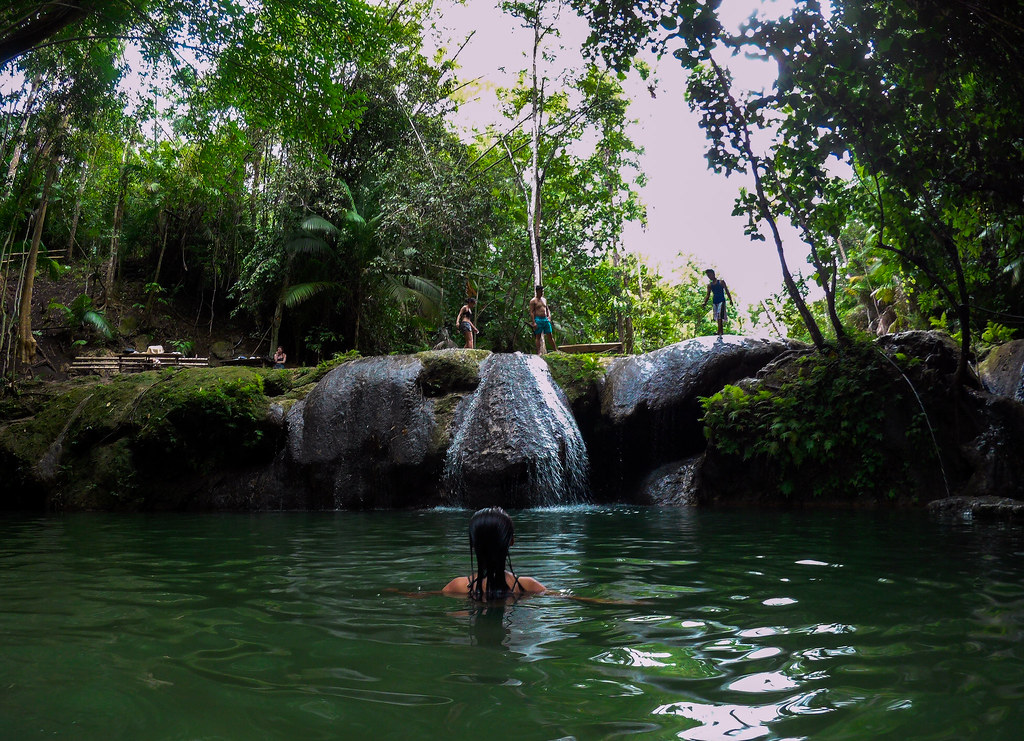 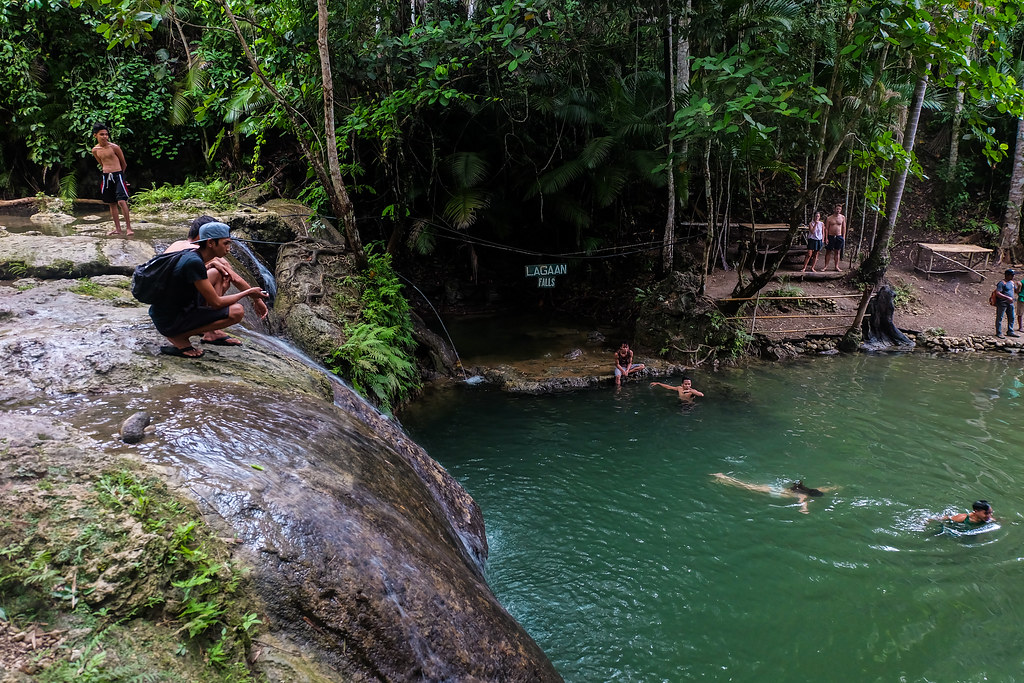 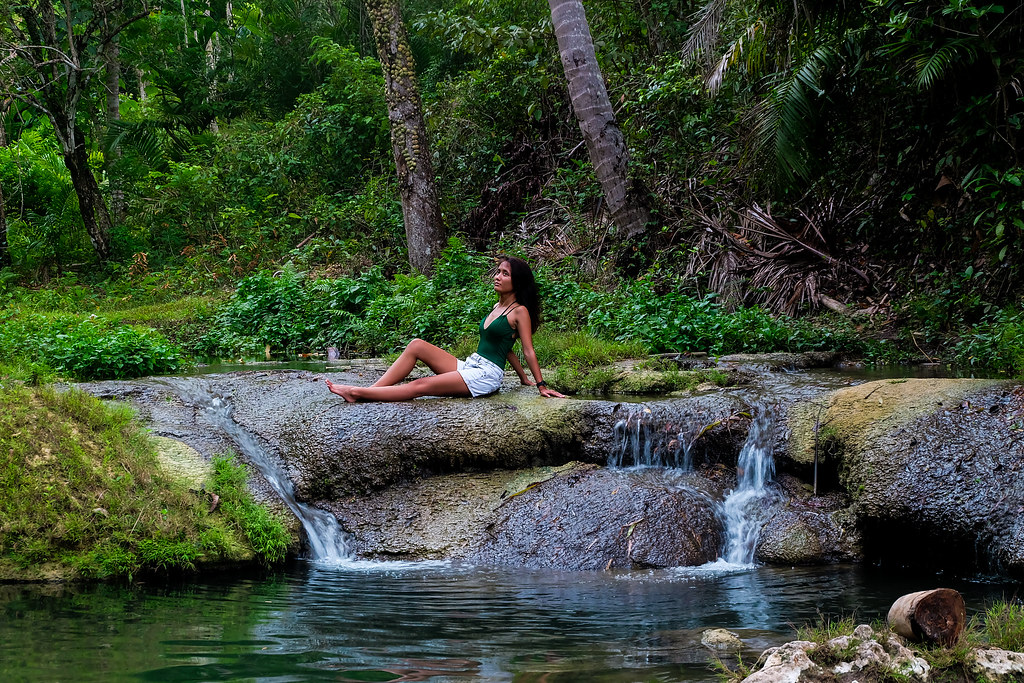 One of the popular spots in the island that people flock to is Cambugay Falls. I must tell you, getting there takes knee power as it requires getting down a flight of stairs. But when you do get there, all the exhaustion will be swept away as you lay your eyes on the beautiful electric blue water.

Cambugahay Falls has three levels, but usually, the middle one is empty. Also, just like in Lagaan Falls, you can also swing on the ropes. There’s one at the first level, and another at the third. However, compared to Lagaan, Cambugay can be a bit more crowded. 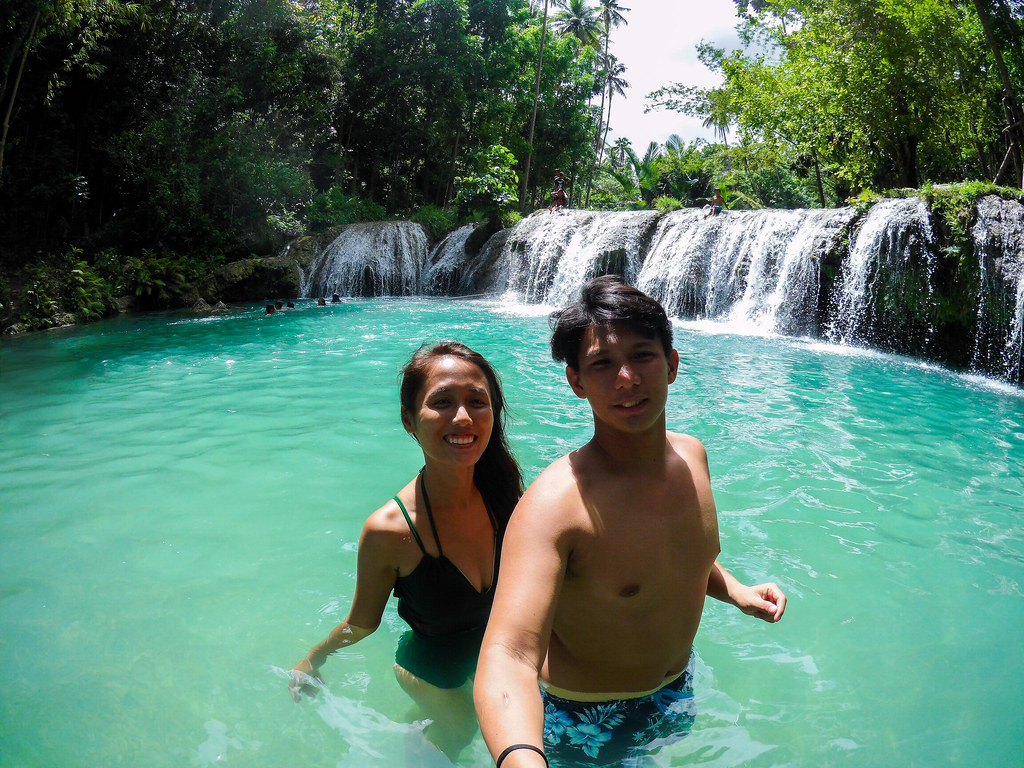 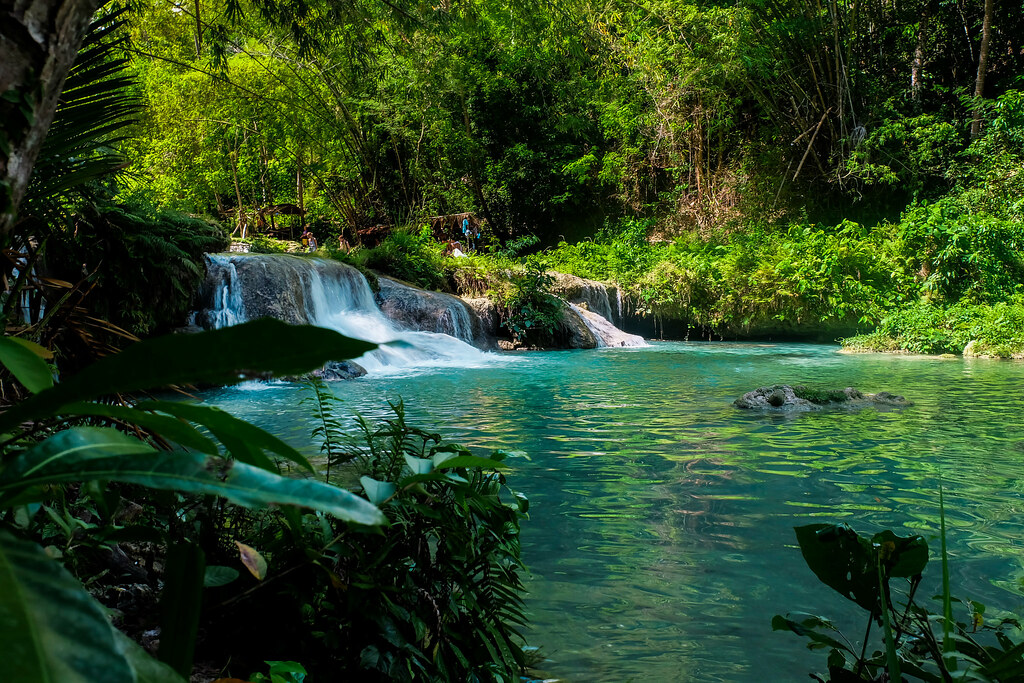 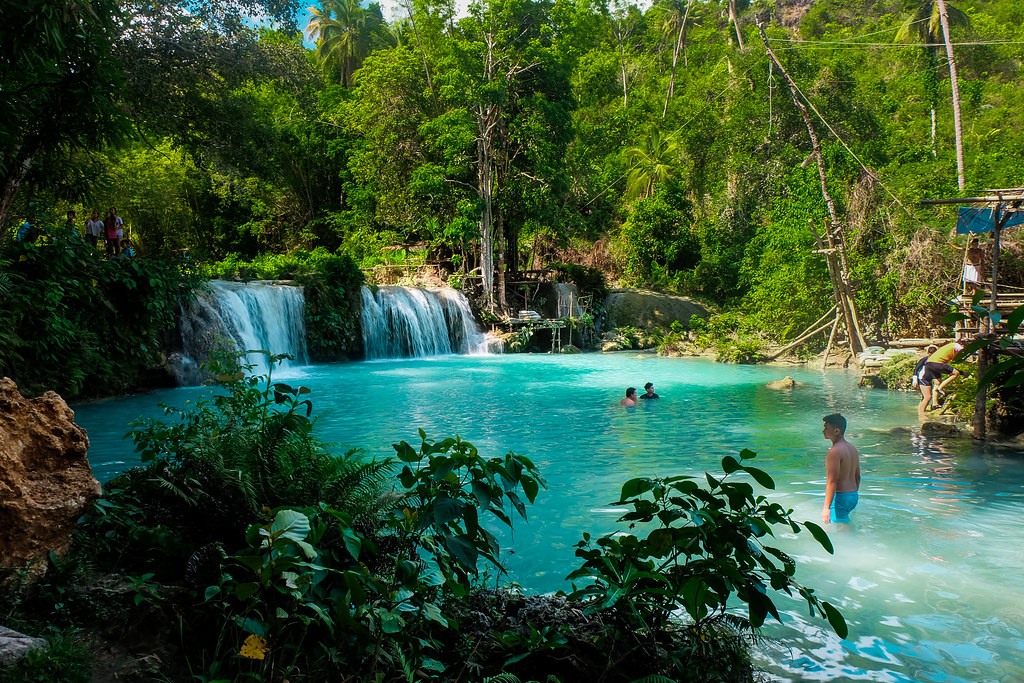 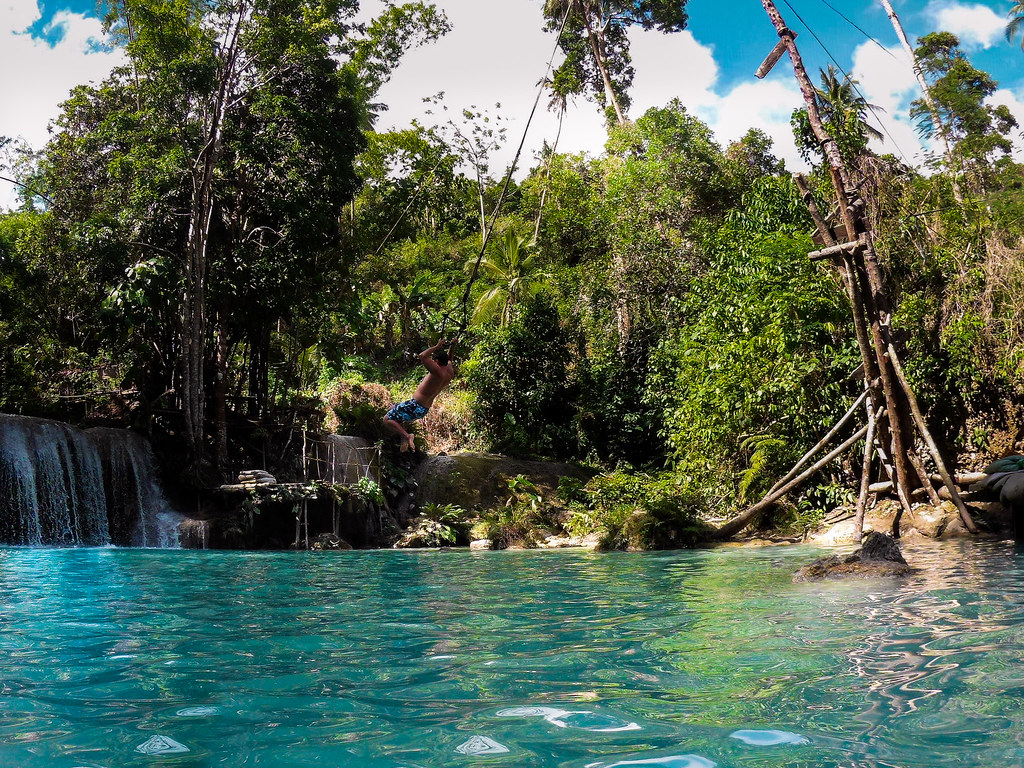 Other sights and attractions in Lazi:

One of the things that I’ve been looking forward to since I planned our trip to Siquijor is cliff jumping at Salagdoong Beach. I’ve tried cliff jumping in Boho Rock Resort in Camotes, but I still got a bit scared as I stood in one of the platforms in Salagdoong. There are two, one at 20 feet above the water, and the other at 35 feet.

We didn’t get to spend much time here because this was our second to the last stop and we were in a hurry, plus I also got injured. Hehe. A reason to go back, perhaps? (To explore the place and go cliff jumping again, I mean. Not get injured. lol)

I don’t even have any decent pictures of the place except for the one below. And a screenshot from my travel video. 🙁 I want to spend an entire day here next time. 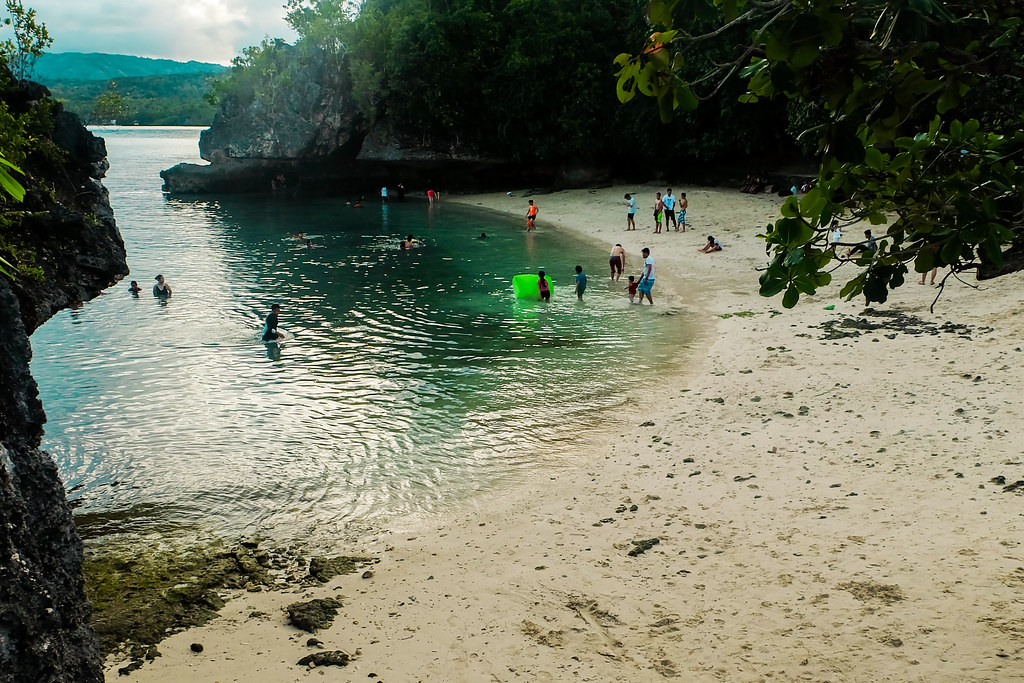 It took the boyfriend and I a couple of minutes before taking the plunge from the 20 feet high platform (because looking down before jumping is really a bad idea), but when we finally jumped and reached the water, I felt so alive despite all the body pain that the impact gave me. Haha.

The man-made forest in Salagdoong is said to be the biggest of its kind not only in the country, but in Southeast Asia as well. You’ll pass through it on the way to Salagdoong Beach. 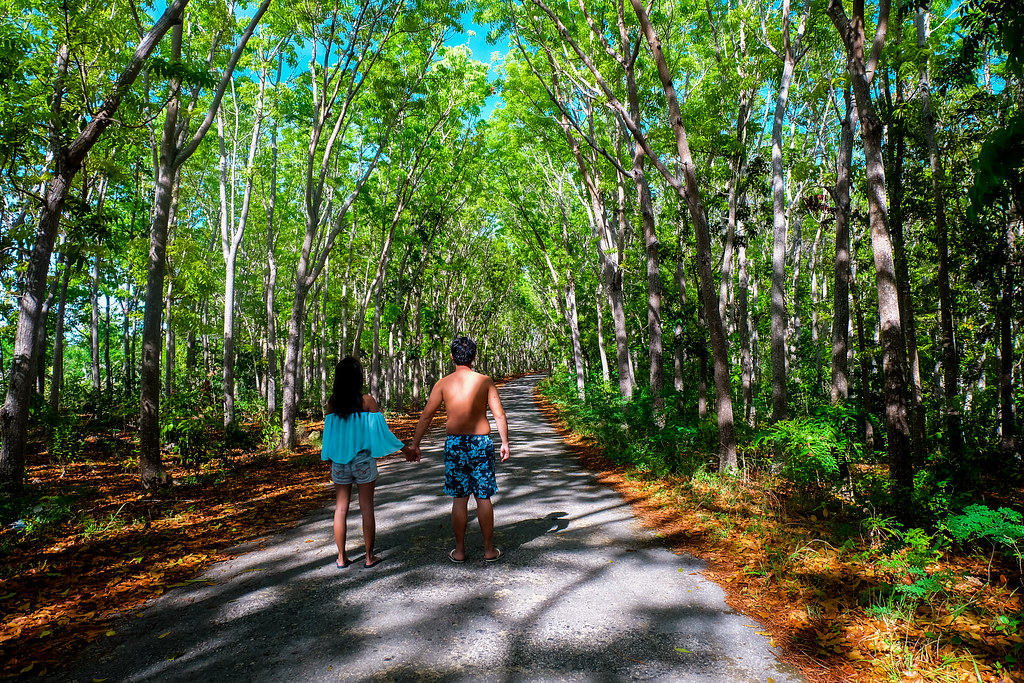 Other sights and attractions in Maria:

Located in the center of the town of San Juan is the Capilay Spring Park, where you can swim in a vast spring pool with tilapia fishes.

The pool has three levels. The upper portion is where the natural springs can be found. The middle portion, on the other hand, is the swimming area for visitors. Lastly, the third portion, which is located near the road, serves as the “laundry pool.”

Cottages are available in the park for those who wish to spend a day or a few hours there. The water in the swimming pool is deep, so if you have children with you, be sure to look after them closely. 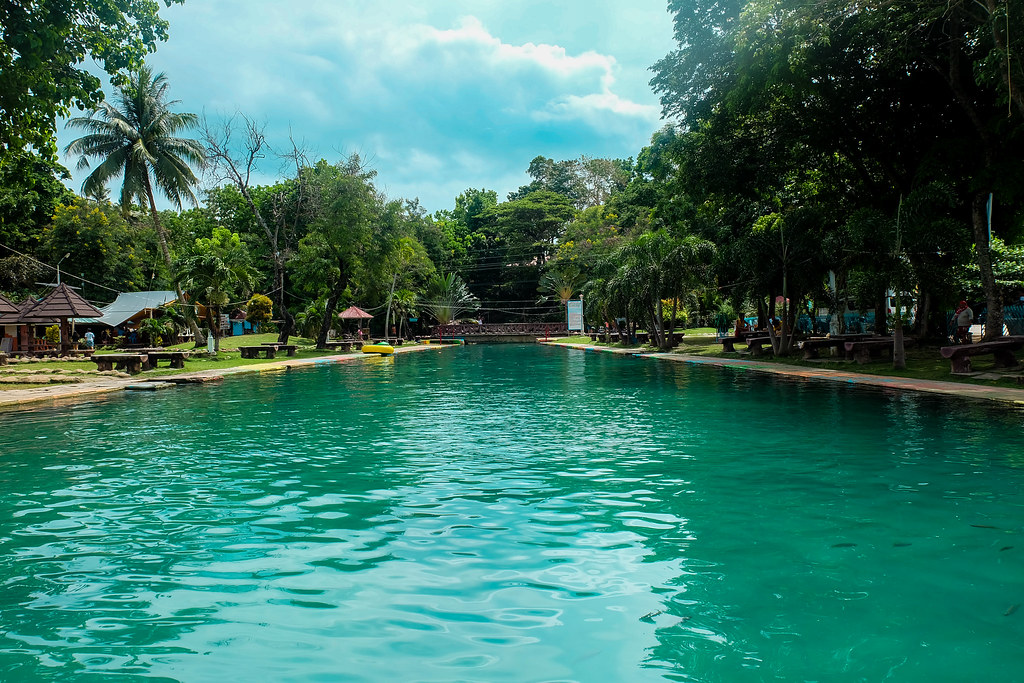 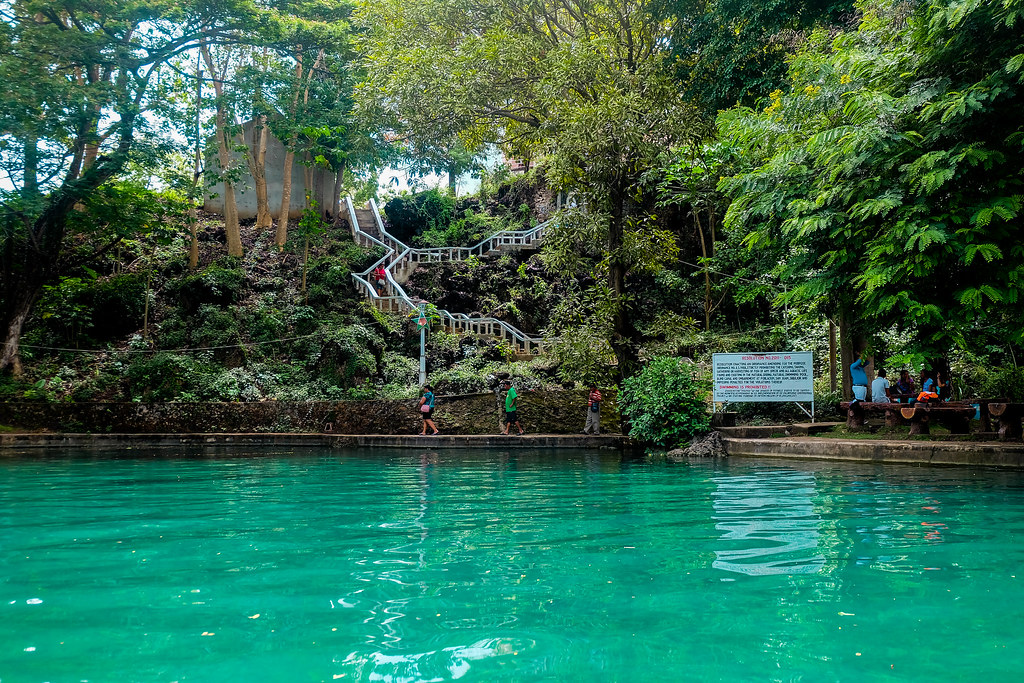 To reach the beautiful white sand beach of Paliton, it requires entering a “private property,” which isn’t really private, by the way, because anyone can go in. We went here early in the morning, during our second day in Siquijor. Other than us, there were only a couple of fishermen present in the area. I really loved the tranquility of the place.

There is also a marine sanctuary on the other side of this beach. The entrance can be found a few meters before the “private property” sign. 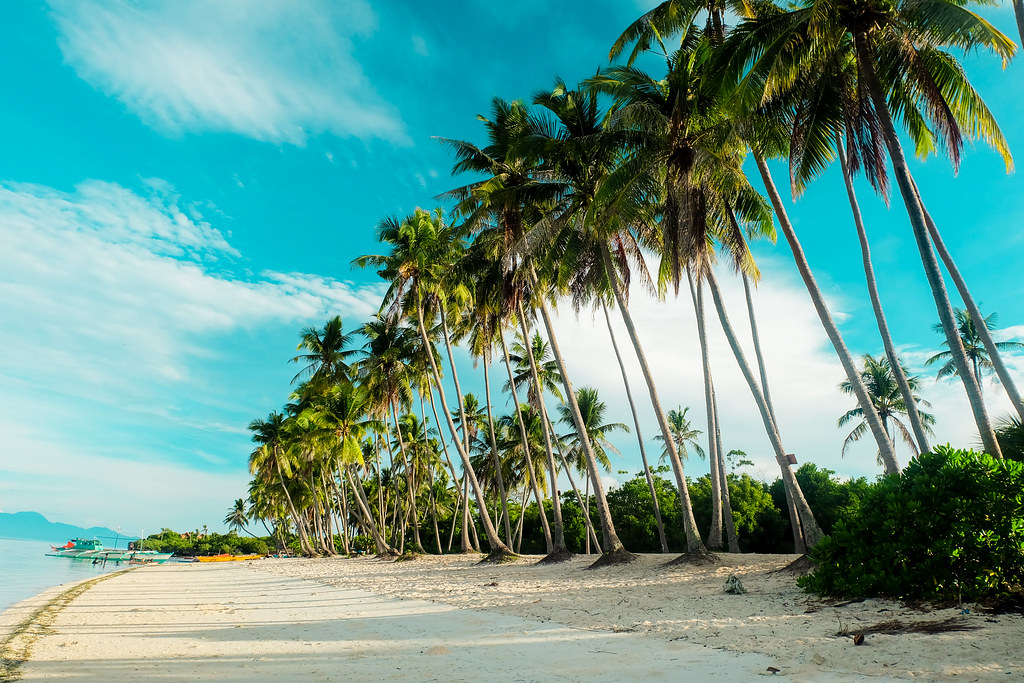 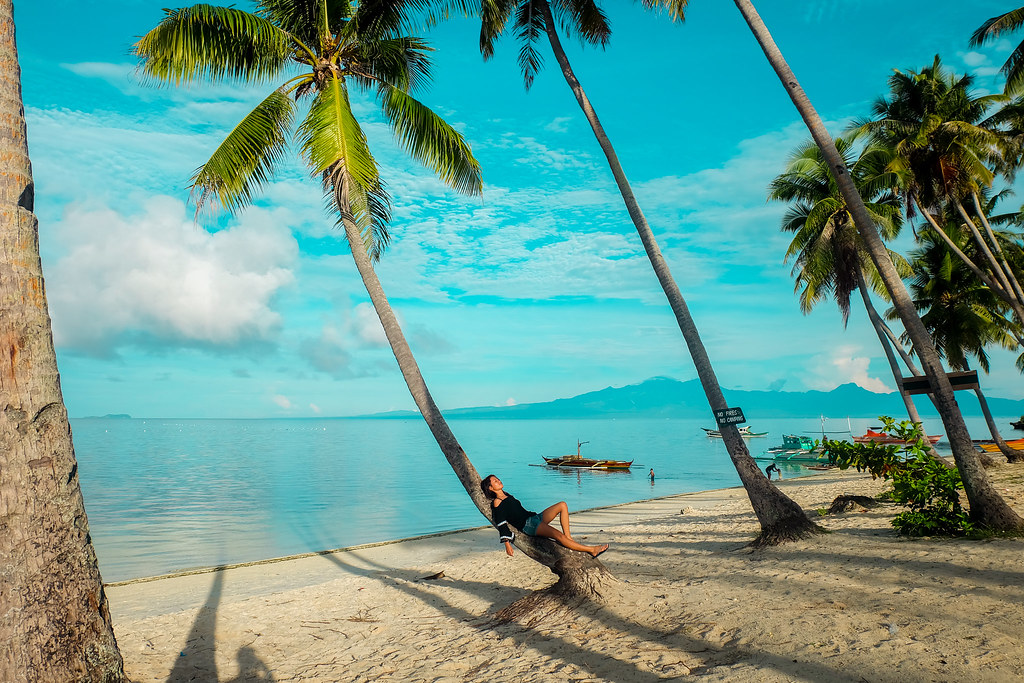 Other sights and attractions in San Juan:

When you see a dome-like figure atop a mountain in Larena, that’s the Triad Coffee Shop. This was our last stop for the tour. However, we went here not for the coffee, but for the view. 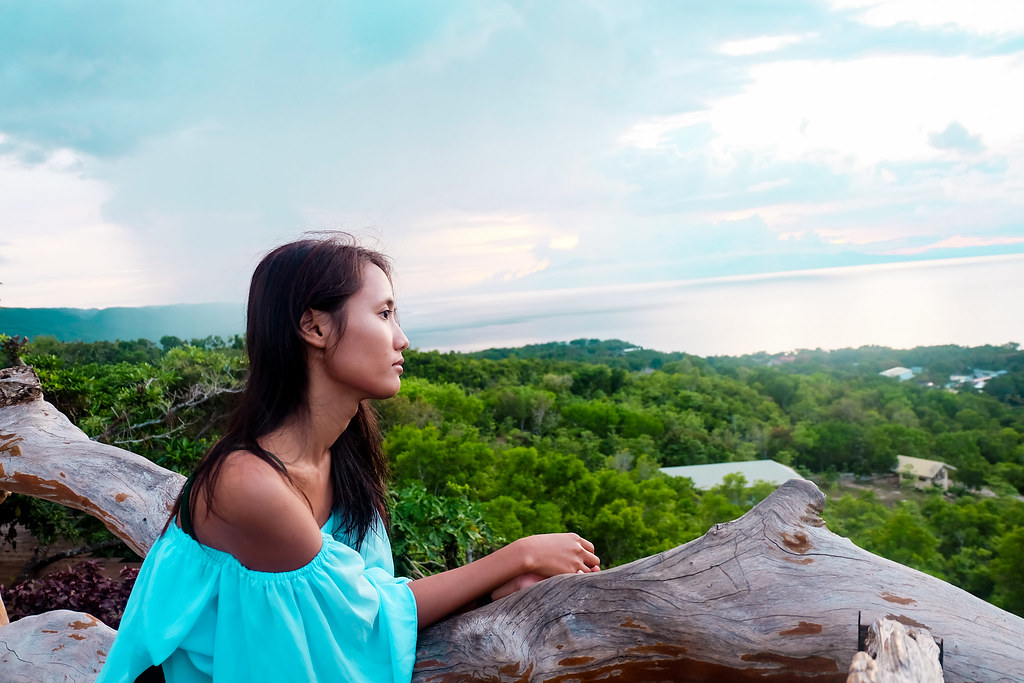 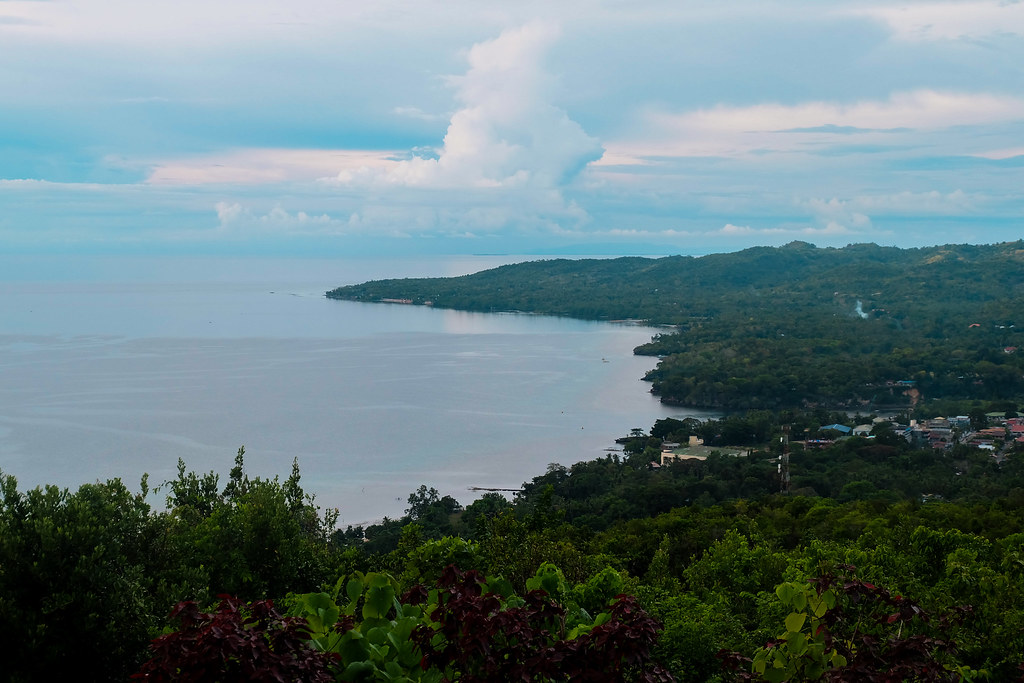 Other sights and attractions in Larena:

Sights and attractions in Siquijor proper:

Sights and attractions in Enrique Villanueva:

Note: I will be updating this post once I get the chance to go back to Siquijor… maybe some time next year. 🙂

The reason why I picked this resort was because it’s located near the port. Also, the other resort that I tried to contact didn’t respond to me. Sigh. Anyway, it’s located in Siquijor proper, specifically in Dumanhog. It’s a big resort and the view is pretty nice.

We stayed at the Family Suite. The room had a decent view of the beach and it was near the restaurant and swimming pool. It was really spacious, had three beds, sofas, air conditioning, cable tv, hot & cold shower, and a refrigerator. However, the bathroom was really small and didn’t quite match up to the beauty of the rest of the room. Also, our accommodation, which was priced at Php 4,300 per night, didn’t even come with free breakfast. Bummer!

The beach was nice, but it sort of resembles Santiago Bay in Camotes Island, where you have to walk a distance to get to the deeper part of beach. However, you have to be careful around here because there are A LOT of sea urchins. (Watch the video at the end of this post and see for yourself. Haha) 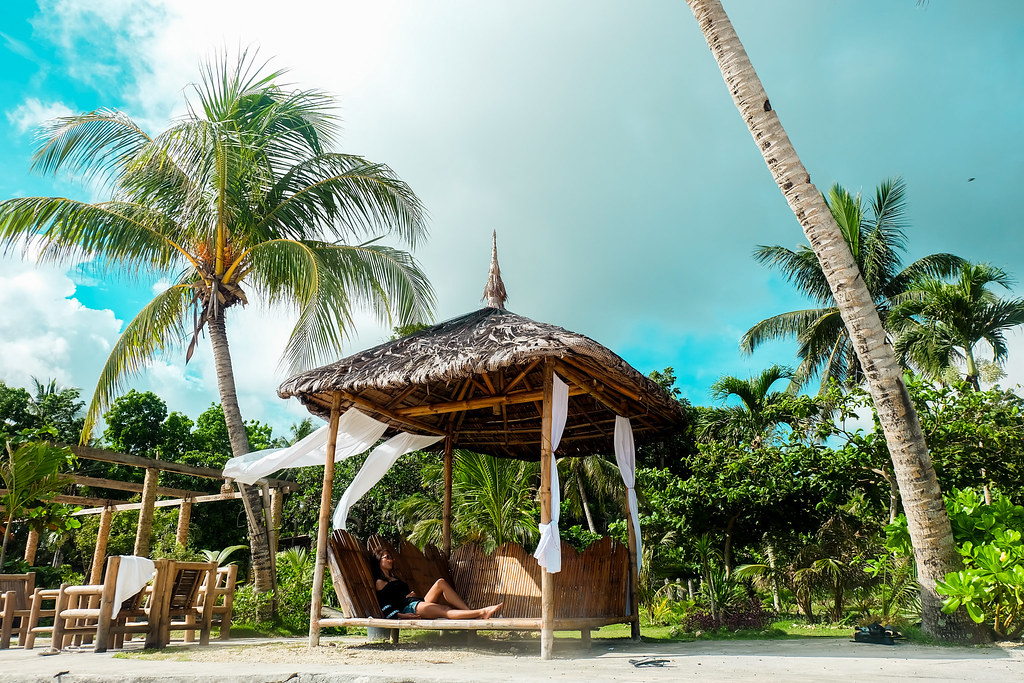 For more information about Tori’s Paradise, you may contact the resort through these channels:
Mobile number: +63 912 209 5789
Website: www.torisparadise.com

How to Get Around

If you’re traveling solo or as a pair, you can get around the island on a motorcycle (if you can drive one). As you arrive at the port, you will see motorcycle rentals in the area. The rental fee is around Php 350 per day (without gas). This is cheaper, and also much preferable compared to renting from a resort because you’ll have your own transportation going back to the port when it’s time for you to go home.

Another option if you’re traveling as a pair or in a group of three is by tricycle. From what I’ve read, tours cost around Php 1,000 per day.

If you’re traveling with a group, renting a van may be the better option. Since there were six of us, we opted to rent a van (with driver) that would take us around. I contacted PLG Travel Services via Facebook and I was so happy that everything went smoothly during our tour.

I’ve heard that you can also tour Siquijor by renting a multicab for almost the same price as the van rental. I’m not sure about the exact rates though.

How to Go to Siquijor

If you’re coming from the Dumaguete City Airport or from the Sibulan Port, simply ride a tricycle going to Dumaguete City Port. It’s located near Siliman University and Rizal Boulevard.

There are several ferries and fast crafts going to Siquijor, but if you want to get there in less than an hour and you’re willing to shell out a couple of hundred pesos for the fare, I recommend traveling with OceanJet. The first trip going to Siquijor is at 7:20 AM and the fare is Php 230.00 per person. Also, it’s advisable that you purchase your tickets ahead of time, like the day before or hours prior to your departure.

If you’ve got questions or if I made a mistake with anything, feel free to leave a comment or get in touch with me here.

P.S. I didn’t include a “Where to Eat” portion because I do not remember the names of the restaurants we went to (although there were only two) and I also wasn’t able take pictures.  #thehungerwasreal lol